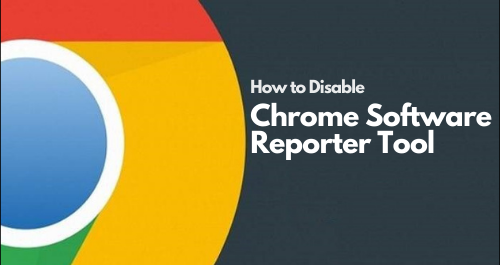 This automated reporting tool keeps on working and consumes so much CPU memory and results in the low memory and slows down the system. So, how to disable or stop chrome software reporter tool to speed up system and browser.

We all know about Google Chrome one of the most popular web browser introduced by the Google for multi operating system and devices. Initially it was launched for Windows machines in 2008 but later it launched for almost every operating system including Linux, MacOS, Android, iOS and etc. Let’s get started with this article on how to stop chrome software reporter tool to improve system performance in Windows operating system machines.

What is Chrome Software Reporter Tool?

Software reporter tool is gets installed with the Chrome as it’s Chrome’s pre-built feature. Whenever someone installs Google Chrome on their Windows device, a file named as software_reporter_tool.exe gets installed automatically with Chrome installation, which can be seen in it’s app data folder under SwReporter folder. To redirect to it’s directory location, you can simply go through the following command and will jump in to Reporter Tool folder.

This software reporter tool is digitally signed by Google to show it’s authenticity to let the users free of fears of any suspicious activity. You can check the Google cleanup tool properties.

Related: How to Copy and Paste in Chromebook

As per Google News on this reporting tool, this software reporter tool runs weekly and scans the Chrome usage performance and sends the results back to Google. This reporting action happens only once a week as per Google announced before.

This tool also stops any harmful files to get downloaded. Whenever a malicious coded file is downloaded, it detects and stops the download instantly.

A Google representative explained to show Cleanup tool autenticiy and is a part of Google;

“software_reporter_tool.exe is an executable file that is signed by Google and downloaded as a component under Chrome’s application data folder. It is used to report whether unwanted software is present on the computer so that chrome can prompt the user to run the Chrome Cleanup Tool (which used to be named Software Removal Tool, aka SRT).”

How to Disable or Block Chrome Software Reporter Tool

As we mentioned before about the Software Reporter Tool which gets installed automatically with the Google Chrome installation. It scans for the usage and unwanted harmful downloads and reports to Google. Chrome keeps on updating a suspicious or malicious codes database with ESET Scan Engine and stops the every new threat to privacy wherever it gets found.

So, as it keeps sending usage information to Google that can also slow down your machine. If you don’t want this tool to report any usage info to the server then you can easily disable this reporting tool which will help in increasing performance of the system to Maintain Your Computer.

Note: disabling this reporting tool won’t cause any issue with Chrome.

In order to disable chrome reporting tool, follow the given steps.

If you ever wanted to turn the chrome reporter tool back on then you can do the same to enable it. Just select Enable Inheritance this time instead of choosing Disable Inheritance. That’s all you need to turn it back on.

How Can Kinematics Help You Understand the Movements Of a Robot

How Can IT Professionals Help You in Achieving Top-Notch Computer Security?

How To Protect Custom Web Applications From Security Vulnerabilities

The Problem Of Hackers in Video Games

How To Get Gold In OSRS Fast And Easy

How Can Kinematics Help You Understand the Movements Of a Robot